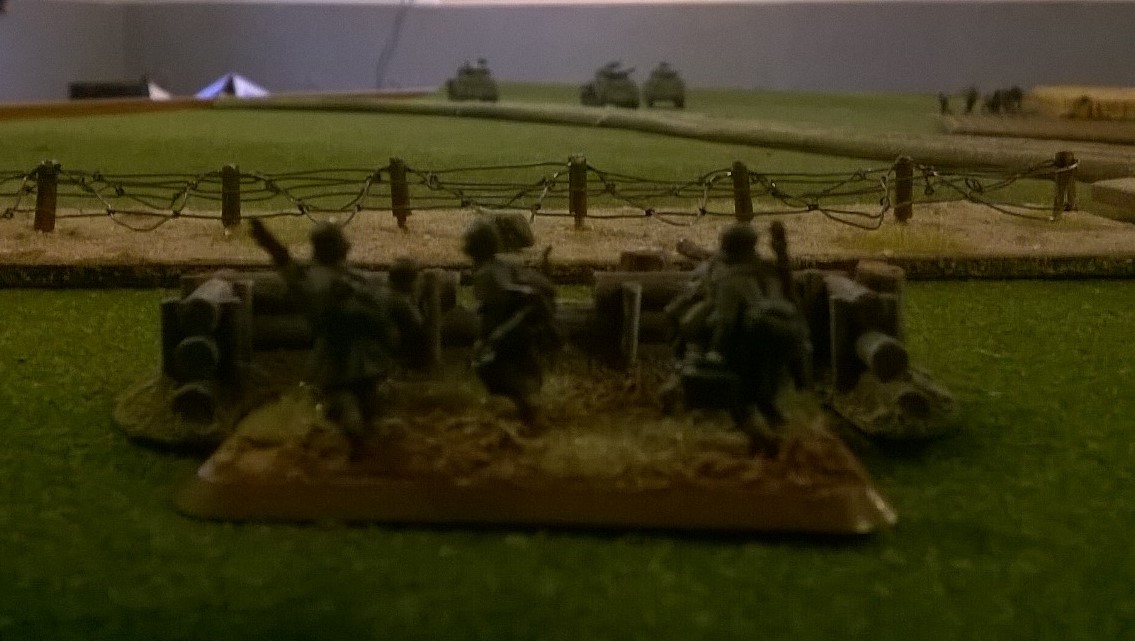 Making wire obstacles in 15 mm can be quite a challenge since at such a small scale the wire would actually be too small to see. How do you represent something that is too small to see? The truth is that you can’t if you want to keep everything to scale. The goal of this project is to make something that looks as much like actual wire as possible, but still looks reasonably close in scale to the other terrain around it. To do this will require a lot of concessions, so choices will have to be made about what features to concentrate on and which ones to ignore. Everyone’s perceptions about what looks good and what doesn’t are a little different, so take this as a general guide and modify it to suit your own personal preferences.

The double apron fence is the most historically accurate fence to use if you are trying to represent a World War II era entanglement. Most WWII pictures only show apron fences, or a mixed concertina/apron fence. A strictly concertina fence was not normally used until a later date (and then normal wire was still used for structural support). For this reason we decided to try and do a double apron fence.

To get started you will need some thumb tacks, staples two drill bits, some base material, small round coffee stirrers, some wire, and glue. The wire should be the smallest gauge you can find, and can be either stranded or solid (depending on your personal preference). Steel wire is preferred because of its greater strength, but not completely necessary. The first drill bit needs to be as small as practical but sturdy. The second drill bit should be slightly larger than whatever size the head of your thumb tacks are.

Make yourself a template so that all of the bases are as close as possible to being identical. Once you have your layout figured out, use the small drill bit to place a hole everywhere that a post or ground stake will be located on the actual bases. To speed this process up, tape a stack of bases together to drill them en masse. Next use the larger drill bit to countersink a depression for the tack heads to fit into in every place that a post will be located. Once the tacks are glued in, you will have a very strong low fence post that is as close to “scale” as you are likely to get.

If you are making something that only requires low pickets then just file off the sharp point of the tack. This works great for concertina wire if you are playing a fairly modern time period game and are only using concertina. If you need a taller post, leave the point on because it makes it easier to sleeve it later. Doing this for a shorter fence at 15mm scale would be very difficult so we will be making a taller variation of this fence. The problem is in the proportions. The fence post we will be using must be wider than it should be to scale, so a taller post looks better proportionally than a shorter one.

To make the fence posts we will used coffee stirrers. After a long and fruitless search for some suitably sized ones, I finally gave up and decided to just come some down to size. The first step in reducing the diameter of your coffee straws is to cut one side open, this will allow the straw to collapse in on itself a lot easier.

Now you will need a reducing block. This is simply a series of holes of gradually reducing size. Start by using a drill bit (of the diameter that you want the final post to be) and drilling a single hole into a block of wood. Next use a slightly larger bit and widen just the top of the first hole, before drilling a second hole next to the first. The idea is to create a funnel to help guide the straw into the hole. Continue this process until you have enough holes to work with. The top funnel hole of your last one should be large enough to accommodate the straw before the reducing process starts.

You will need to draw the straw through each progressively smaller hole several times. The first pull is very hard since you are bending the plastic along the entire length. After that each pull gets easier (we needed three or four pulls). Once it goes through easily, it is time to move on to the next size hole. Once you get the hang of it, this process goes very fast.

Now that you have a bunch of suitably sized straws to make the posts with, simply cut them to the desired length and set them aside. Gluing them down to the thumb tacks is the very last step in the process so don’t do it yet. In the next article we will discuss the making of the wire portion of the fence.