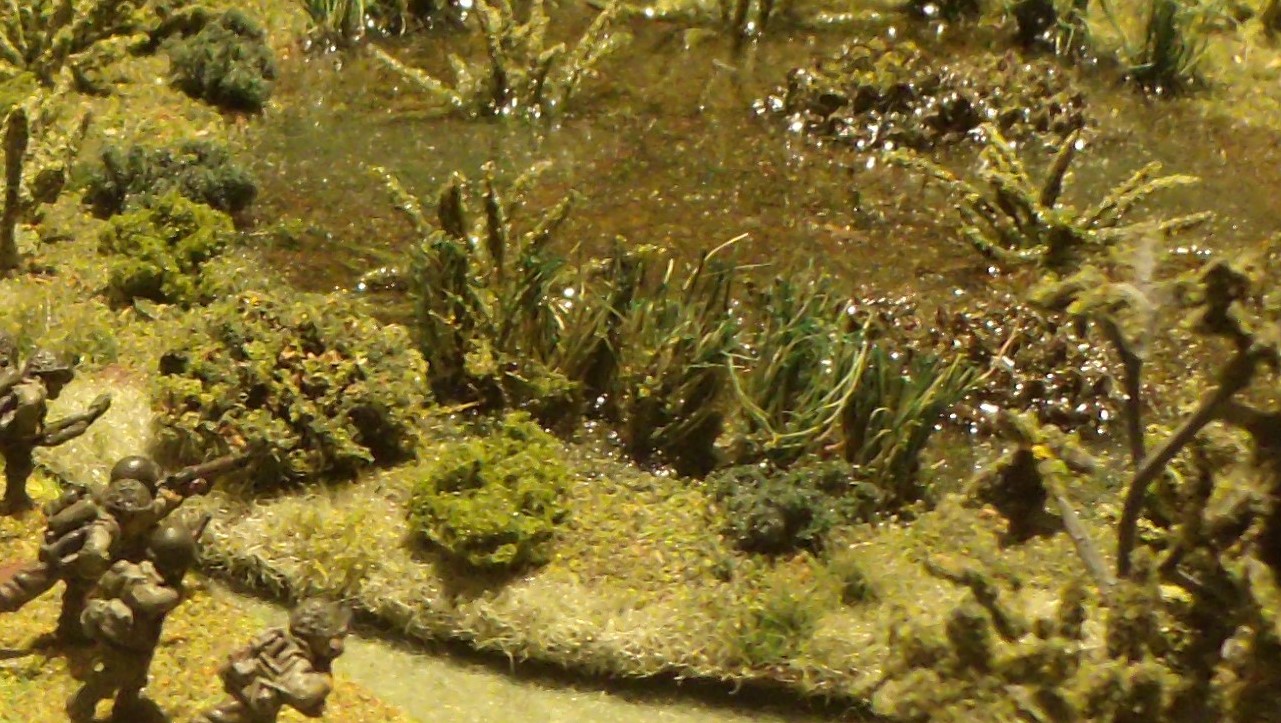 The third plant was made using this funny looking decor item I found in an interior decorating shop.

It consisted of a bunch of individual fronds all arranged around a spherical frame to give it the ball like appearance. It was broken apart into its smallest pieces since we only needed some ground hugging plants.

Each individual tuft was then colored with a paint that “bonds to plastic” and then flocked.

These three plants were then glued into place on the bases. Lots of room was intentionally left between plants to allow for the resin “water” to be visible between them.

For the subsurface aquatic plants, we also used a mix of three different flocks. The first one was made by cutting up some moss into small pieces.

The three flocks we used looked like this before applying them to the base. The one on the left is a fine grade of ground flock that has a mixture of similar colors. The middle one is static grass, and the one on the right is the cut up moss.

These were then glued down in clumps between the larger plants.

A clear resin is poured over the flocking. Make sure that you use something that is runny like water, with a low viscosity, and is self-leveling. A thicker product meant to be molded into shape won’t work, because it won’t flow between the plants and soak into the flock properly. Be very careful not to spill any of the resin onto any of the taller plants and just let it flow in around the bases of them. If you do mess up and get a glob of clear resin on a plant, just wait till it dries and reapply some more of the original flock on over it. Don’t worry about spilling on the unflocked portions of the base or the banks of the marsh since these will be covered with flock later.

If you like the look of the super clear water then skip this next step since it is intended to make it look less pristine. While the resin is still not yet cured sprinkle a very small amount of very fine flock over the surface. This reduces the shininess of the water and gives it a bit of a murky look. Be very careful while doing this because it is very easy to overdo it. If you do happen to overdo it, don’t worry; just add another thin layer of the clear resin over the top again.

Once the resin has fully cured, finish off the rest of the base with a mixture of low plants and flock.