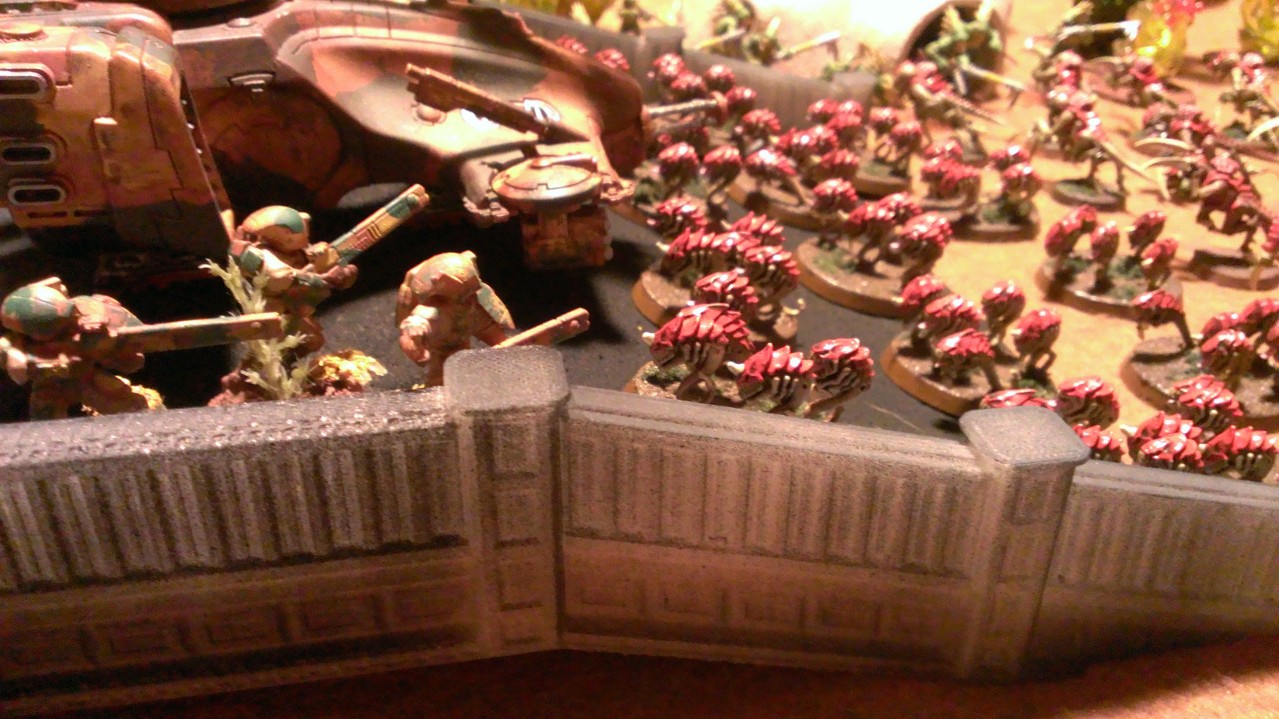 At this point, we have printed out six bridge pieces. This isn’t enough to assemble a complete bridge, however it is enough to do half of a small one. All we were trying to do with these pieces was confirm that everything fits together as it is supposed to. Our bridge is meant to be simple to put together, so we figured why not give it to someone who doesn’t make terrain as a hobby? So, I gave it to my wife.

She has no previous experience with any sort of terrain making, so it was a new experience for her. We gave her very minimal instructions (“here, make a bridge”), and let her figure out most of it on her own. I must say that I was pleasantly surprised at how well she did! Since the only parts we had ready-made for the test were the railings, she had to make her own road. She was ambitious enough to try making a bridge with a sidewalk, which adds a bit of complexity to something otherwise pretty straightforward.

Her original plan was to make the flat surfaces of the bridge using picture-framing mat board. This would have been an excellent material to work with since she already had a lot of experience working with it. It’s a very dense, high quality cardboard that can be easily cut with a knife, making it ideal for someone who needs a strong material they can cut easily. Unfortunately it can be a little hard to find, and in the end, she couldn’t find any quickly enough. Instead, she settled for some corrugated cardboard that was in the recycling bin.

The biggest problem with using a corrugated material is that the exposed sides (of the sidewalks) needed to be filled in with putty. This required a lot of sanding that she wasn’t happy about, but the smooth look helped make the half-bridge look complete.

When cutting and bending (to a larger angle) materials like cardboard and foamcore it’s usually a good idea to make an angled cut on the inside. This makes it easier (and stronger) to glue and keeps you from having to fill too many cracks.

If you decide to use corrugated cardboard for a project like this, then we strongly suggest using a heaver variety. Lighter corrugated cardboard has a tendency to warp and buckle when glue is applied resulting in uneven or warped surface most of the time. Also when it gets wet (like when you paint it) it tends to sag between corrugations, causing a wavy look. Most of the problems she encountered while making the model were directly caused by the material used being too lite.

She used a fine sand to texture the roadbed with. A few larger chunks of sand take a bit away from the otherwise convincing concrete texture.. The easy fixes for that would have been either to sift the sand prior to gluing it down or simply knocking the larger ones off after it dried.

As an experiment to check the fit of the side pieces and confirm how easy it will be to actually make, we think that this was a success. Once we get the molds and start making the pieces, the plan is to sell them in two different formats. The first is just selling the side pieces, so that people interested in making their own bridge lengths and widths can do so. The second is as complete kits, where where the roads, sidewalks, etc have already been taken care of for you. The option will be cheaper (both the kit and shipping), but adds some challenge to the assembly process in exchange for more flexibility. The complete kit will come in only one width, but making several lengths will be possible. The bridges can easily be made to break down into three or more smaller pieces for ease of storage and transport. Also, this setup makes it easy to swap destroyed bridge pieces in mid game!