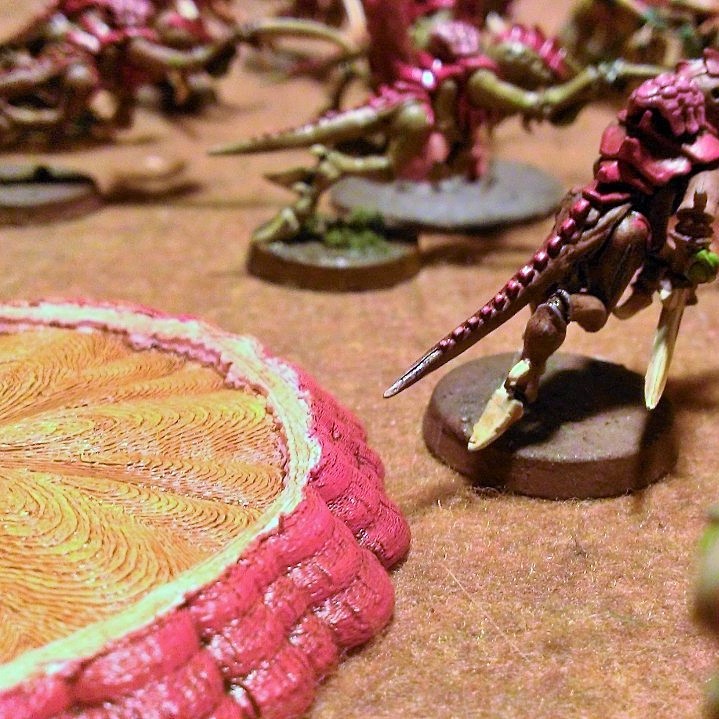 This hive was an experiment to see what we could do with our 3d modeling skills and our printer. It didn’t turn out exactly as we expected, but we learned a lot. The printer did something we weren’t expecting, but the end result is cool enough that we thought that we should share it with you. The original plan with this drawing was to make lots of clusters of very small organic looking structures. The model uses a lot of flat surfaces, which should appear smooth at small scales. Since we had no idea how large we could go before the flat spots became noticeable, we decided to do a large version as a test.

The big surprise was that the gradual slopes that were drawn in the model were printed like a topographical map. It gave the finished printing a sort of oyster shell look. It only did it to the sloped top part of the model, so it added some interesting texture in all the right places (for this model at least). For most other situations, this look would ruin the terrain piece. Hopefully this is something we can fix, and we will have to try it again later.

A very big part of learning to make stuff with a 3D printer is experimentation. My personal background makes me more comfortable with engineering than art. I have a lot of ideas, but am limited by my skill set. Organic shapes in particular can prove difficult. I possess absolutely no sculpting skills, however I do have some limited drafting skills, so I decided to try drawing one of these ideas. Drawing an object that is all flat surfaces is one thing, but trying to make an organic looking surface is another entirely. This project is new territory for me from many different perspectives. It did teach me a lot, and has convinced me to give my other “organic looking” ideas a try.